Some things keep getting better -- and one of those is a trip to pick-your-own fruit and then to feast on barbecue and smoked meats.

Larriland Farm in Woodbine is one of my favorite places in Howard County.  I've been going for more than a decade, and it truly gets better each time.  They've got delicious fruit -- and vegetables and flowers.  Plus credit card machines in the fields.  What else do you want?

Lil' Chow and I drove out I-70 Saturday, and we hit the blueberry fields at the end of the opening rush.  Honestly, we only hit about 10 bushes.  The plants were covered in ripe blueberries.  We worked mostly standing still, and we got three pounds of berries by just reaching out.

I was pleased to see that Lil' Chow could mostly identify the ripe fruit.  Our cardboard box had a few purple berries, but this seemed like an idea field for kids because even a four-year-old could reach the bushes, see the ripe blue ones, and avoid crushing them like we did with strawberries a few year ago.

I amused myself by asking where Lil' Chow thought beets were growing.  He alternated between "trees" and "bushes."  So he was shocked when we walked across the road to pull beets from the ground.  (Only after he made me walk all the way to the apple trees because he thought the baby apples might be beets hanging from the limbs.) 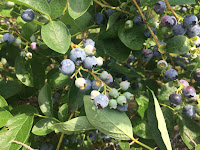 The blueberries were delicious.  Morning in the fields was a fun adventure.  And Larriland just gets better over the next four months -- from peaches, tomatoes and blackberries to apples, pumpkins and Halloween festivities.

The barbecue has gotten better as well.  At least the location.  For years, I've talked up the Town Grill, which was a joint in a gas station in Lisbon between Larriland and I-70 that made their own barbecue and smoked their own beef, pork, salmon and more.  They've moved out of the gas station.  (More on that below.)  They've opened a full counter-service restaurant in the former Foster Country Store with the full menu of barbecue and house-smoked meats -- along with way more tables, beer and wine.  It's in Ellicott City on Frederick Road just south of Turf Valley -- still great for a stop on the way home from Larriland and an easy drive from most of Howard County. 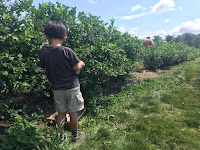 Lil's Chow and I hit up the new Town Grill for chicken fingers and smoked lamb.  Eventually, I will write the definitive post about chicken fingers that make a kid smile.  But, for now, I'll talk up the meat and sandwiches, which are the successes that make a middle-aged guy happy to splurge here and pass up everyday barbecue.  Unique and flavorful -- down to the details like an excellent bun, really good coleslaw, and chips that look like they were fried in the back from slices of potato.  And, of course, the meat.  In the past, I've swooned over brisket and pulled pork.  This time, I tried smoked lamb, sliced with a crispy edge.  I definitely got smoke and lamb without gaminess.  It was a nice variation, although I'll probably return to one of my old favorites on the next visit.

And there will be a next visit.  Folks next to me got great-looking breakfasts, which are served all day.  I want peaches later this summer, and we'll do at least one trip to pick our pumpkins and apples.

Check out the new Town Grill website for a menu and directions.  This is at Frederick and Tridelphia roads, an easy drive from Rte 32 or Rte 40.  And, if you're in Lisbon, notice that the gas station replaced Town Grill with a restaurant called The Grill.  That name seems cheeky to me.  Their food might be good, but don't let the name fool you into thinking that's the kitchen that you knew on past trips.

Hat tip to Guano -- one of the many awesome folks who posted updates on my "last" post while I was off the blog.  Guano led me to the new Town Grill with his comment.
HowChow at 6:00 AM
Share