Cooking Classes in Howard County; Chef Ben Tehranian Gets A Rave From Jackie 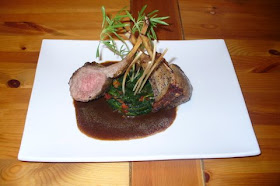 I have always wonder about local cooking classes, but Jackie actually got up and did one -- a night with chef Ben Tehranian who she recommends.

Tehranian lives in Columbia and teaches from his town house off Snowden.  Jackie made an appointment, then picked one of the 10 menus on his website.  She says he was really flexible with scheduling, and they cooked a menu that included soup, poached pears, lamp chops and more.  (He also snapped photos for her.)

The 10 menus all run six courses.  It looks like an adventure, and Jackie said she had a great time:

It was $95 for the session which normally runs 2.5-3 hours, but I managed to get 3.5 hours out of him :) That included all of the food, copies of the recipes, take home containers and a pretty little certificate for completing the lesson. He also mentioned that he's willing to work with any kind of menu, not just the ones listed on his website. He's trained in classical French but I should mention that he used to own a seafood restaurant in which he received many awards for his crabcakes, which he will teach you how to make!! He also gives discounts for groups.

Anyone else know about local cooking classes?  I feel like I have heard about classes at Donna's and Cafe de Paris.  Anyone have experiences?  I would love if you'd email me a photo and a description of what you paid, what you did, what you thought . . .